* I attended this event for free, in exchange for a full and honest review. *

Every now and then I’m lucky enough to attend film events. On April 30th I had the opportunity to attend the first Rooftop Film Club screening of 2019, on the roof of Bussey Building in Peckham. 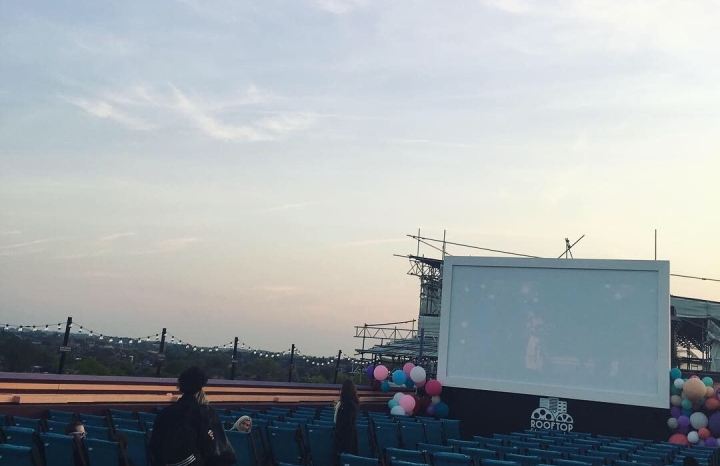 The screen, surrounded by balloons – a nice hint at the film we were about to watch.

I was really impressed by what they’d done with the place; it was a beautifully colourful array of balloons, flowers and other vibrant decorations. Considering we were watching the wholesome Pixar film that is Up, it seemed appropriate to have a splash of colour everywhere.

At this point I couldn’t resist the urge to take a few pictures with the balloons, as they made for a very fun backdrop. Excuse my somewhat awkward poses, I haven’t quite nailed my modelling yet but practice makes perfect as they say! 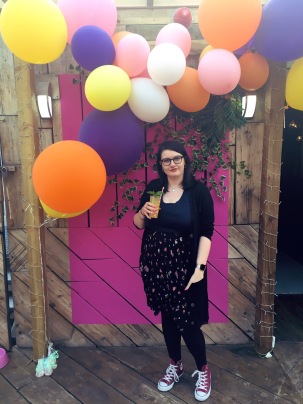 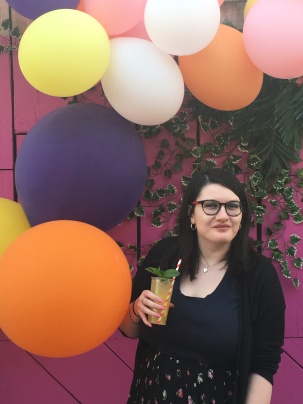 Before the film started, we got the opportunity to mingle and sample the variety of food and drink that was on offer. The portion and quantity was incredibly generous, and was far better than anything you’d get at your regular cinema (sorry guys).

Here’s a few examples of what we were treated to. All the edibles were provided by the wonderful Rockadollar, famous in London for their street food. Think hot dogs and burgers, but a bit more dolled up. Oh and they’re very messy, so ask for napkins!

Chips! Either sweet potato or regular. You could also get these smothered with cheese but as someone who’s lactose intolerant, that wasn’t the best idea… 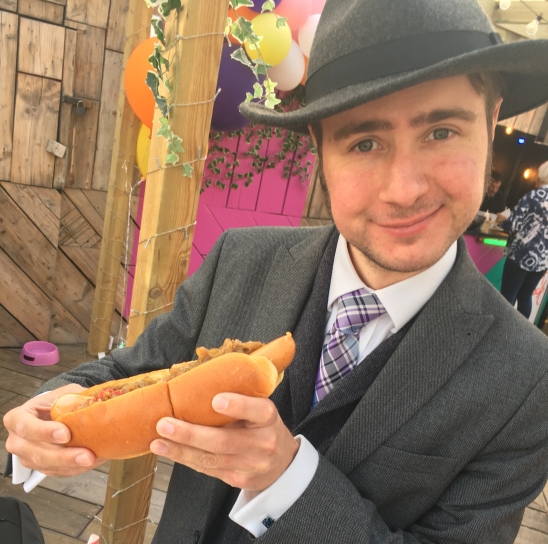 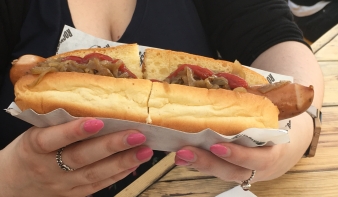 Hot Dogs! Modelled here by my love, Mr Lucy Goes To Hollywood (or Josh), who looks like he’s just stepped out of a noir film, and me, who off-camera looks terrified to eat that thing. The messiest of the bunch but oh-so tasty. 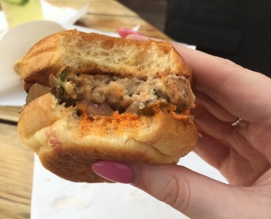 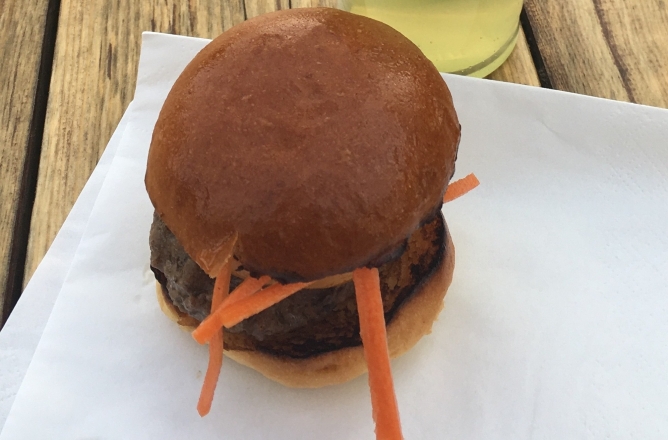 Burgers! Available in veggie (left) and meat (right). I tried both because you know, it would have been rude to say no. Both were very good, but the meaty one was messy!

As for drinks, they were brilliant too. They’d created two special cocktails for the evening, themed to the film we were about to watch. Here’s the menu: 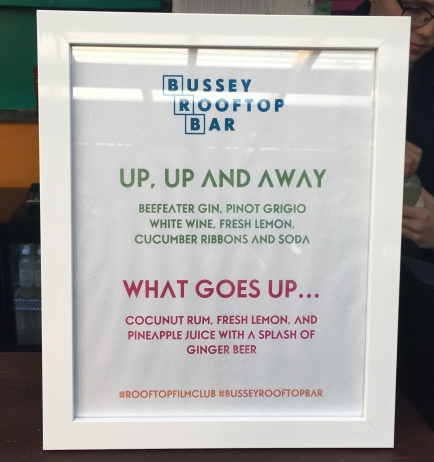 Isn’t it delightful? Naturally my eyes were drawn to the one involving white wine and gin (maybe there is a God), but I really liked the coconut rum and ginger beer concoction too. If cocktails aren’t your thing, you could also get beer, wine, or a variety of soft drinks. 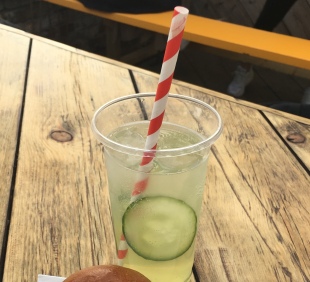 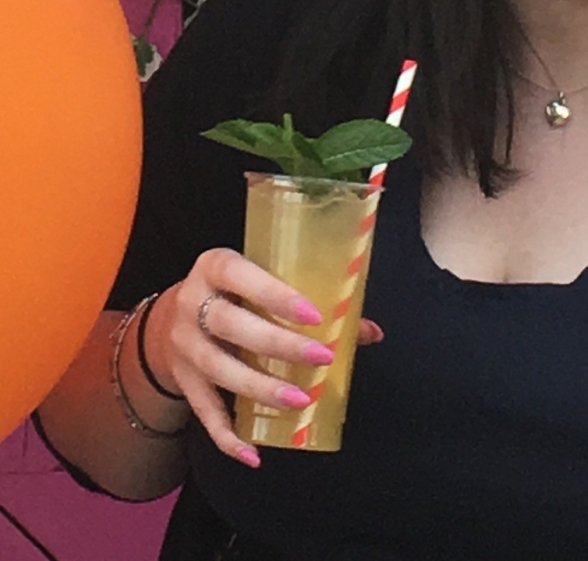 Up, Up and Away (left) and What Goes Up… (right). Two very different cocktails. One crisp and delicate, the other spicy and full of flavour. Bonus points for the fact they both have ‘Up’ in their names – I like that.

So, on to the screening. I had never done an outdoor screening before so I was interested to see how it would work. Josh and I went through early to get one of the ‘cuddle seats’ (that may not be the official name but I like it), essentially a deckchair big enough for two people. It was incredibly cosy.

Since we were outdoors and we’re in England, everyone got a blanket to keep themselves warm. To avoid annoying all the residents in Peckham, we were also given with headphones for a cinematic experience that was silent to anyone peering in. For someone who wears glasses, the headphones did press against them a bit and made it uncomfortable, but I’m nitpicking here. The audio quality was very good and a great way to not disrupt anyone. 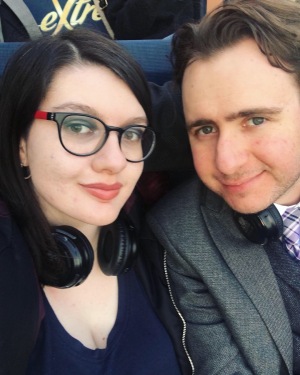 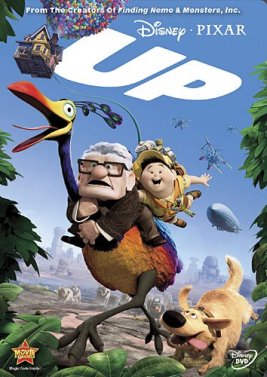 The two of us sitting in a chair, and a poster for the Oscar-winning 2009 animated film Up. I know what’s more impressive.

Watching the film during sunset was a sight to behold, and when it got dark we had lights all around us to add to the atmosphere. I didn’t take any photos during the screening itself, as I didn’t want to be disruptive.

On our way out, we were given a goodie bag each. Considering the screening and refreshments had been complimentary for the evening, the goodie bag was incredibly generous. Here’s what was inside: 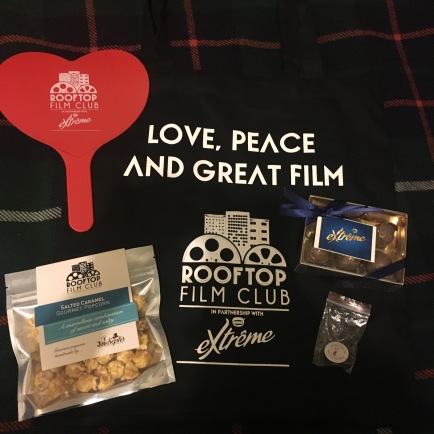 The tote bag contained the following:

Overall, this was a fantastic event and something I would highly recommend during the summer months. You can’t really say no to food, drink and a good film, and this event combines all three things so perfectly. If people are telling you to go outside more, why not compromise? With Rooftop Film Club, you can watch films AND be outside. What a great middle ground.

One thought on “A film with a view: watching “Up” at Rooftop Film Club”